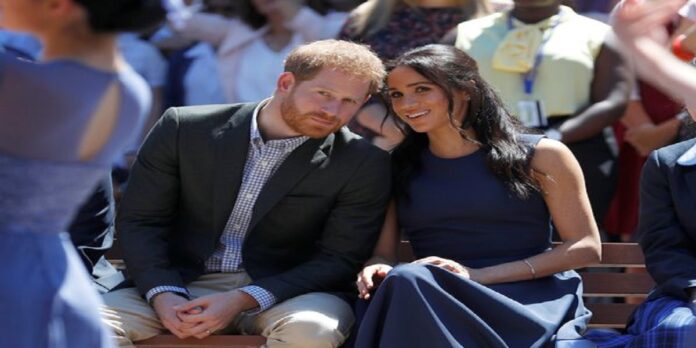 It could be some time before Meghan Markle and Prince Harry share an official photo of their newborn baby girl, Lilibet “Lili” Diana Mountbatten-Windsor.

Meghan Markle and Prince Harry are expected to keep the names of their newborn daughter’s godparents a secret after a closed-door christening.

The Sussexes announced the birth of Lilibet “Lili” Diana Mountbatten-Windsor on Sunday, two days after she was delivered at a hospital in Santa Barbara, California.

Given their breakaway from the Royal Family, the couple are in complete control when it comes to revealing details about the birth and introducing their daughter to the public.

Meghan and Harry cradled Archie during an official photocall at Windsor Castle two days after his arrival in May 2019, but it could be some time before they share a picture of Lilibet.

The couple have been fiercely protective of two-year-old Archie’s privacy, sharing very few images of him as a baby and a toddler.

They are expected to hold Lilibet’s christening behind closed doors, and her godparents are not expected to be revealed, the Telegraph reported.

When Archie was born, the couple broke with tradition and refused to publicly announce the names of their son’s godparents.

A newspaper report later revealed Archie’s godmother to be Harry and Prince William’s former nanny Tiggy Pettifer, and his godfathers to be Mark Dyer, former equerry to the Prince of Wales, and Harry’s friend Charlie van Straubenzee.

Lilibet was born at 11.40am on Friday June 4 at Santa Barbara Cottage Hospital in California weighing in at 7lb 11oz.

The Queen, the Prince of Wales and the Duchess of Cornwall, and the Duke and Duchess of Cambridge’s social media accounts shared their congratulations on the happy news.

Lilibet is the Queen’s family nickname and the choice pays tribute to the monarch at a challenging time for the Windsors, who are mourning the loss of the Duke of Edinburgh.

They have also faced heartbreak and division after the Sussexes, who quit as senior working royals last year, plunged the monarchy into crisis with their bombshell Oprah Winfrey interview.

Harry made further controversial comments about his family in the following weeks, and has also experienced a long-running rift with his brother William.

In a message of thanks on their Archewell website, Harry and Meghan said: “On June 4, we were blessed with the arrival of our daughter, Lili.

“She is more than we could have ever imagined, and we remain grateful for the love and prayers we’ve felt from across the globe.

“Thank you for your continued kindness and support during this very special time for our family.”

She added: “Both mother and child are healthy and well, and settling in at home.

“Lili is named after her great-grandmother, Her Majesty the Queen, whose family nickname is Lilibet.

“Her middle name, Diana, was chosen to honour her beloved late grandmother, the Princess of Wales.”

Harry had long been expected to honour his late mother Diana, Princess of Wales, who died in a car crash when he was 12

The couple’s spokeswoman added: “The duke and duchess thank you for your warm wishes and prayers as they enjoy this special time as a family.”

The new baby is the Queen’s 11th great-grandchild, and the first to be born since Philip’s death.

But with the Sussexes living in California and amid troubled relationships with Harry’s family, it is not known when or if the new addition will meet the Queen and the rest of the royals.

Just like Archie was not entitled to be a prince or an HRH when he was born in 2018, the Sussexes’ daughter is not permitted to be a princess or an HRH due to rules set down more than 100 years ago by George V.

Lili will be entitled to be a princess and Archie a prince, both with HRH styles, after the death of the Queen and when Charles becomes king.

This is because they will have moved up the line of succession to become the children of a son of a monarch.

Despite Harry and Meghan quitting as senior working royals, the baby still has a place in the line of succession.

She is eighth in line to the throne, coming after Archie, who is seventh.