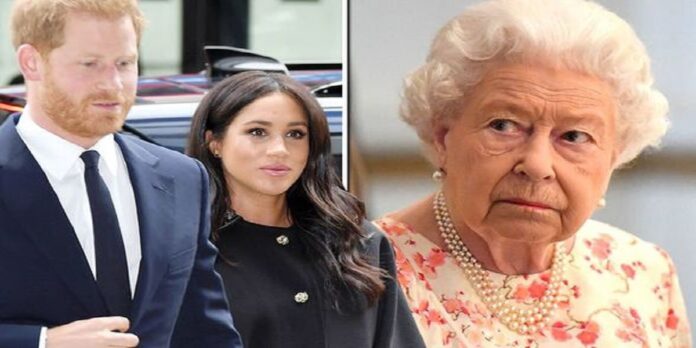 It took just 18 minutes for Harry and Meghan to respond to the Queen’s unprecedented statement banning them from her Jubilee celebrations.

Prince Harry and Meghan Markle revealed they would attend the Platinum Jubilee celebrations just minutes after being snubbed by the Queen.

The couple confirmed they would make the journey from their home in LA with Archie and Lilibet for the four-day royal bonanza in June.

It came just 18 minutes after it was revealed the Queen was banning Harry and Meghan from the Buckingham Palace balcony.

The visit will be the first time Harry and Meghan have brought their family to the UK since leaving for the US in 2020.

There was speculation the Duke and Duchess of Sussex would not fly back amid their ongoing row over security.

A statement said: “Prince Harry and Meghan, The Duke and Duchess of Sussex are excited and honoured to attend The Queen’s Platinum Jubilee celebrations this June with their children.”

The Queen is yet to meet 10-month-old Lilibet, who will celebrate her first birthday during the celebrations.

She has also not seen Archie, who turned three today, since Megxit.

The family will not be joining Her Majesty for the traditional Trooping the Colour RAF fly-past from the Buckingham Palace balcony.

Only working members of the Royal Family will wave to crowds on The Mall as the monarch celebrates 70 years on the throne – meaning Prince Andrew is also out.

There were fears they could “hijack or overshadow” the long weekend’s events, which take place from June 2 to June 5.

It is not known which parts of the celebration Harry and Meghan will take part in.

The announcement comes after Harry sensationally snubbed the Queen again last month in a bombshell interview.

He made a barbed remark about his ongoing row with the UK government over his security that saw him miss Prince Philip’s memorial service.

When asked whether he will return to the UK to mark the Platinum Jubilee, Harry told US journalist Hoda Kotb: “I don’t know if I’ll come. There are lots of issues with security and everything else.

Harry has only been back to the UK on three occasions since Megxit in 2020 when he moved to Santa Barbara and stepped down from his role as a senior royal.

The duke came home in July last year to unveil a statue of Princess Diana – around a month after Meghan Markle had given birth.

Harry then visited the Queen with Meghan – their first joint visit since they quit the royal family.